We would like to share our amazing history and the background behind our formidable friend and founder, Mrs Marjorie Lewis-Manning whose drive, determination and inspiration are why Lewis-Manning Hospice Care exists to this day. Having interviewed and spoken to people that knew her well, we believe that Marjorie would agree that her wishes and ambitions were fulfilled. She inspired so many along the way…

Robert and Marjorie Lewis-Manning retired in 1965 – Robert from his single practise law firm and Marjorie as a hotelier. She formerly ran the Westover Hotel on Westover Road in Bournemouth and had done so for many years. She was an exceptional hotelier and it was through her work that she had met Robert as he did her hotel licensing work. Those that knew her would describe Marjorie as extremely determined, a pragmatic business- woman, with exacting standards in life but always with a heart of gold.

Not long after he retired Robert fell ill and passed away in 1969. Everyone who knew her said, “What is Marjorie going to do now?” as she had always been so busy up to that point and had latterly devoted her life to looking after Robert.

Following Robert’s death, Marjorie threw herself in to charity work.  She acquired a particular interest in body scanners, following a visit to Canada to visit her step- son, Garth Lewis-Manning.  She recognised how outstanding the scanners were and how innovative they were at that time.  She subsequently decided to raise money for Poole Hospital to enable them to purchase a brand- new scanner and she roped in all her friends to fundraise. As a result, at that time, Poole Hospital ended up having the best scanner in the UK. The hospital later named one of its scanning rooms – ‘The Lewis-Manning Suite’. The Poole Hospital Cancer Treatment Trust was founded and the charity still exists to this day.

In the mid 1980’s Marjorie became very influenced by Dame Ciciy Saunders, the founder of the modern Hospice movement. Marjorie decided that she would like to convert her home on Evening Hill in Poole, into a hospice as she had identified the need for a day care hospice service in the area, for people living with cancer. Marjorie envisaged that she would live upstairs and the hospice would be downstairs. She started making preparations to do just that and the charity was registered in 1986. There were 4 trustees, including Marjorie, her bank manager Norman Holloway, Tony Roberts and Rachel Lapworth.

However, sadly, Marjorie died in the same year after a relatively short illness, before she could achieve any of her hospice ambitions.  She left her entire estate to the charity. Marjorie’s words were left ringing in the ears of the other trustees…”You know what I want you to do!”  They did indeed and they set about seeking to achieve and fulfil her ambitions.

At that time the hospice movement was flourishing and the team of trustees went to visit other hospices around the country, in order to allow them to experience an operating hospice and how they worked and functioned. These visits filled them with inspiration and were the starting point in knowing exactly what they wanted to achieve.

The trustees started fundraising, recruiting lots of friends locally, including Rotarians from Bournemouth Rotary and a management board was formed. Sufficient funds were raised over the next 4 years to allow Marjorie’s home to be converted into a day care centre. Lewis-Manning Hospice finally opened in 1991, with a senior nurse, an administrator and care staff.

The hospice grew from there. In 1998 the Lymphoedema Clinic was set up and soon after that the Physiotherapy and the Better Breathing Clinics. The hospice gained a reputation for its research on ‘breathlessness’ and as a result the team were invited to present to other hospices in London as what was being achieved was seen as particularly  innovative and pioneering at the time. Other hospices would visit too for instruction and training with the techniques that were used.

As time went on Marjorie’s house became a less practical building for patient care and so, with the help of a gift in a will from a supporter, a significant loan from a bank and local fundraising efforts, in 2012 Marjorie’s home was replaced with a larger, more modern hospice which included inpatient beds.  The charity’s services continued to provide exceptional care for local patients across East Dorset, supporting with day care and overnight stays. As patient and family support grew and changed in delivery and type, so did the type of hospice care needed locally.

In 2019 the charity reviewed the services that it was providing and compared these to other providers in the area and potential gaps in the care of those with life-limiting illness. With 2 NHS hospices providing beds in Poole and Christchurch, the Lewis-Manning charity worked to identify how it could further develop its clinical services and become more cost effective in the future and extend to new service areas in East Dorset, such as Swanage, Wimborne and Wareham, thereby providing support to people where it is really needed – closer to home and in peoples’ homes.

The need for a more central hospice site was identified and a well-received ‘Closer to Home’ strategy was adopted by the Board of Trustees. In April 2019 the inpatient unit (which was costing £1.2 million per year to operate 6 beds) closed while the unique day hospice and support clinics remained fully open for people needing end of life support.  In September 2019 new premises on Longfleet Road in Poole were purchased, with many significant benefits  – being much closer to Poole hospital, its proximity to Poole town, significantly improved bus and train transport links and additional parking.

In September 2019, the building at Crichel Mount was bought by Care South, a Poole based charity who operate care homes and home care services across the south of England.

Care South worked closely in support of the newly named Lewis-Manning Hospice Care and granted the charity a license to stay at Crichel Mount free of charge to enable the uninterrupted continuation of the day hospice, lymphedema and breathing clinics whilst the new premises at Longfleet Road were refurbished.

With the help of many amazingly supportive, kind and knowledgeable volunteers, companies and partners, Lewis-Manning Hospice Care moved from Crichel Mount to the fabulous newly refurbished premises at Longfleet Road in July 2020.  We believe that Mrs Lewis-Manning would have wanted to ensure the future of the Hospice that she cared so deeply about and that she would have fully understood the need to change the way in which we deliver these important services for people at the end of their lives, in order to meet local need. The idea that in some areas of East Dorset no easily accessible hospice services exists and that we are filling that gap, with her legacy, we believe would be of much comfort to Mrs Lewis-Manning. 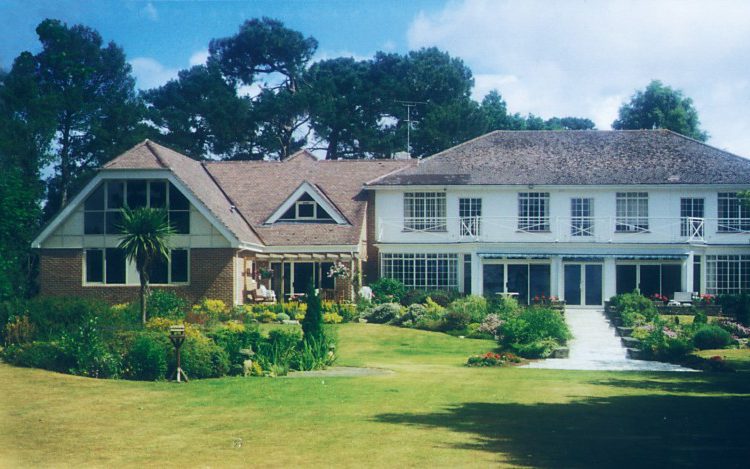 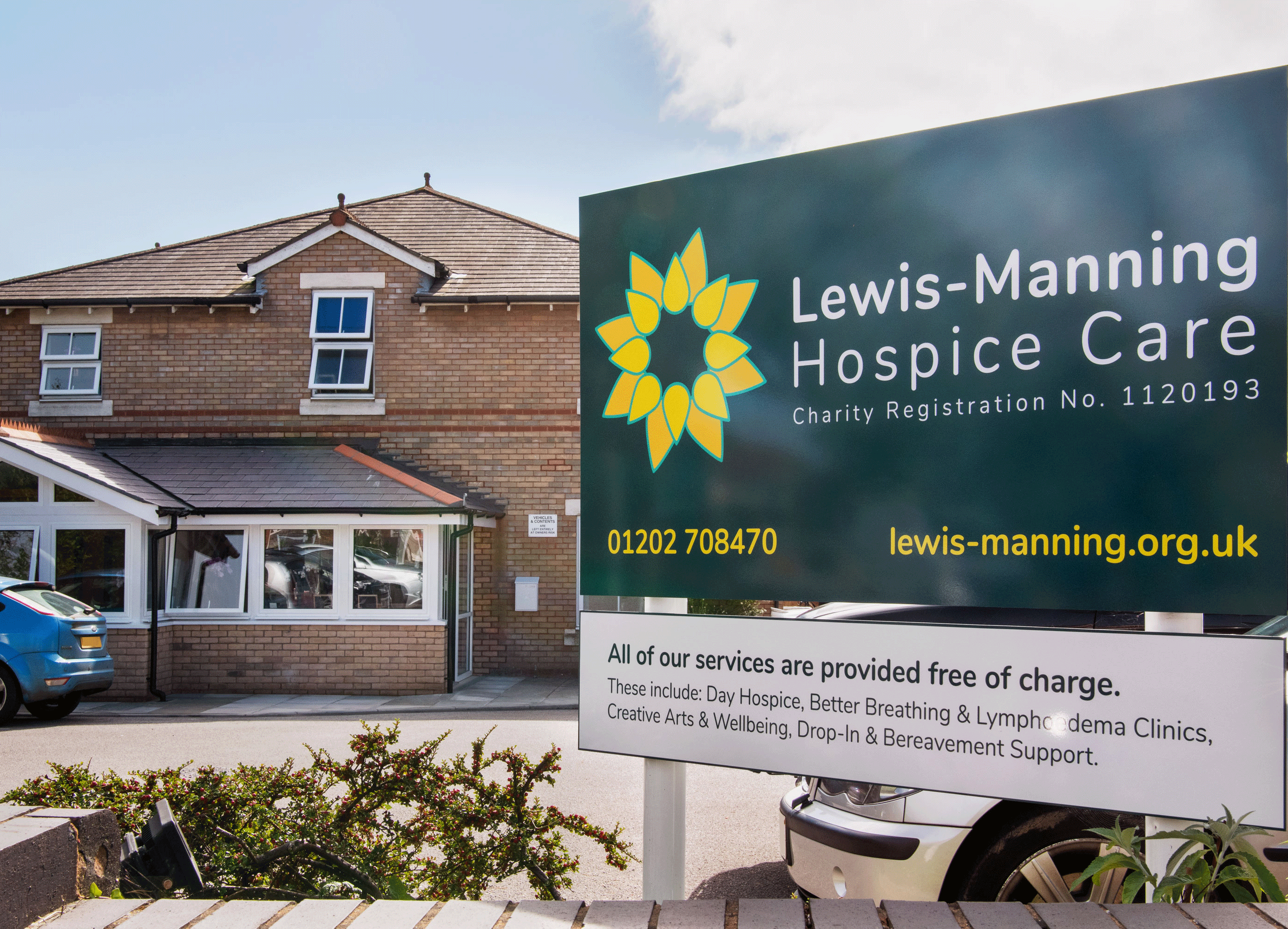 GET TO KNOW MORE ABOUT OUR IMPORTANT SERVICES