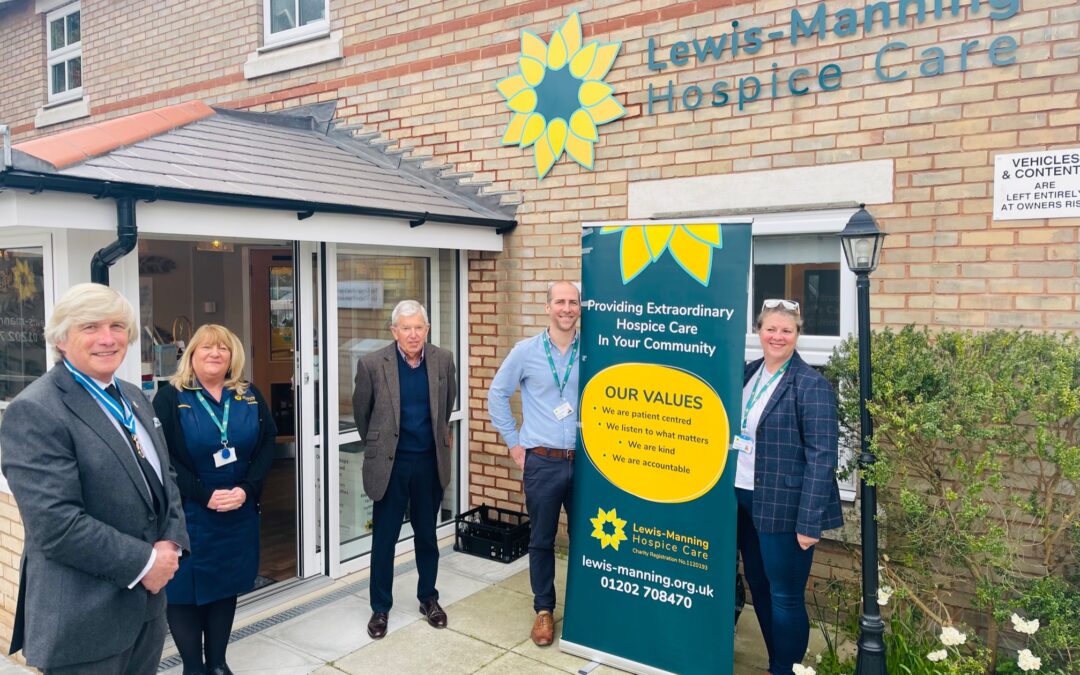 Michael Dooley FRCOG, the newly declared High Sheriff of Dorset, has visited Lewis-Manning Hospice Care and looks forward to fully supporting the charity during his term in office. He took time out to visit the hospice on his maiden official visit in his new role.

Michael said, “I am thrilled to be able to help Lewis-Manning Hospice Care. It was a real privilege to meet with some of the Lewis-Manning team, to understand more about the challenges and opportunities that the charity has faced over recent months. It was brilliant to hear about the fantastic new services and initiatives that have evolved during the pandemic and to learn that the hospice is doing such amazing work for the patients and families that it supports with life-limiting illnesses in the local communities of East Dorset & Purbeck.

“I’m hoping that my support will help to further raise awareness of Lewis-Manning, encourage additional fundraising and allow me to make introductions for the charity.

“During my term in office I am also looking forward to taking part in the charity’s Jurassic Coast Trek Challenge in October. It’s a wonderful opportunity to appreciate the beauty of our Dorset coastline and raise funds for a much-needed local cause at the same time.”

CEO Clare Gallie, “To have Michael’s support in his role as Dorset High Sheriff is invaluable. He was introduced to us by the former High Sheriff, Philip Warr, who championed the charity and worked with us during his time in this role in 2019. Philip was so passionate about continuing his relationship with the hospice that he joined us as a Patron of the charity last year. We very much look forward to hosting events at the hospice for Michael and other guests and volunteers to attend and including him in our vibrant and active hospice community.”

Trustee Timothy Lee added, “We all thoroughly enjoyed chatting with Michael, it was a real pleasure to get to know him and to learn more about his role too. We are so grateful for his offer to support us during his year of office.”

After the huge success of the pilot mobile Lymphoedema clinics at Chapel Gate and in Christchurch, Lewis-Manning Hospice Care is expanding its...

Porsche Centre Bournemouth have partnered with Lewis-Manning Hospice Care as part of their 30th Anniversary Ball. The sell-out celebratory event...